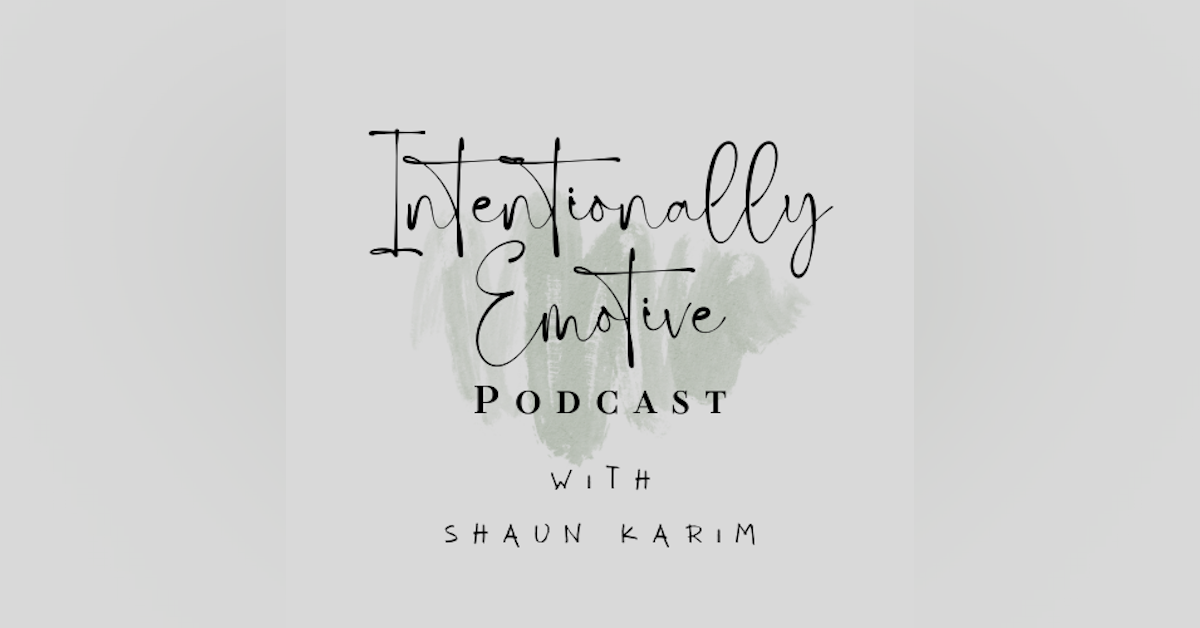 Episode 23 - Blood is Thicker Than Water in a Toxic Family

Episode 23 - Blood is Thicker Than Water in a Toxic Family

Don't let the title confuse you; this is definitely an episode worth listening.

So often we hear that we have to maintain the connections we have with your family because we were birthed into that lineage.

But what if some–or all–of that family makes it difficult, or even impossible, to have that type of connection?  Who is the problem here: you or them?

Comparing those relationships with the ones you’ve chosen with non-family members, it’s not unusual to feel and have a closer connection with them.  Why is that?

In this episode, Shaun explains exactly what this dynamic is like, and even corrects one major saying that so many people unknowingly get wrong.  As a matter of fact, this correction changes everything we’ve ever known about our connection to people, family or not.

With that knowledge, be prepared to change the course of your relationships with people for the rest of your life.

www.shaunkarim.com - Subscribe, listen to past episodes, and leave a voicemail message to be featured in future episodes!

This podcast is part of the Mental Health News Radio Network

Intro and Outro music by Anton_Vlasov from Pixabay

Buzzsprout - Let's get your podcast launched!
Start for FREE

Disclaimer: This post contains affiliate links. If you make a purchase, I may receive a commission at no extra cost to you.

How's it going, everybody?  Welcome to the Intentionally Emotive Podcast with Shaun Karim, part of the Mental Health News Radio Network.

New episodes are available every Wednesday, and If you haven’t already, subscribe on any of the podcast platforms you use, including Apple Podcasts, Spotify, Google Podcasts, and more.

I’ll get into that saying in a moment, but let’s talk about this family bond.  The thought behind the “blood is thicker than water” saying is referring to how family has your back, you can always count on them, they’ll always be there for you, and no one will ever care or love you more.

Something that might be indicative of that is the fact that more than half of Americans live within an hour of their own family.  I think we can pretty safely assume that in these instances, the family bond is strong enough to sustain whatever the relationships are like.  Either that or someone really needs easy access to a babysitter.

In these cases, yeah, of course, it’s obvious that sometimes these family members have good–even great–connections with each other.

But what about the people who are in therapy because of their family?  Whether that’s neglect, emotional or physical or mental abuse, what percentage of people feel like they’re damaged enough that they need to seek a professional’s help to sort themselves out?

It’s not 20%.  Not 30%.  Not even 50%.  In the states, it’s at least 61%.  So at least three out of five Americans you see on the street who are in therapy are in someone’s care because of some negative impact that a family member had on them.  There’s enough toxicity there that someone needs help.

Today’s episode is “Blood is Thicker Than Water in a Toxic Family.”

The phrase “Blood is Thicker Than Water” doesn’t mean what you think it means.  Yes, a lot of people interpret it to mean what I said earlier, but it’s wrong.  Why is it wrong?  Because the actual quote is “the Blood of the Covenant is Thicker Than the Water of the Womb.”

If you don’t believe me, look it up.  Read about it.  Think about it.

The bond that you make with someone–regardless of who they are–at your will is more important than the people who are bound to you by blood.  It’s like when you see two non-family members who have a strong relationship cut their palms open, then shake each other’s hand–a blood covenant to signify the strength of the bond they’ve chosen to have with each other.

FAMILY DOESN’T GET TO GET AWAY WITH YOUR MURDER

Let’s go back to the incorrect saying and interpretation of “blood is thicker than water.”  People use that in a lot of different scenarios, but the one that sticks out the most is when people say that as an argument of you forgiving a family member who wronged you; that the blood connection you have with them at birth supersedes any harm they caused you.

I don’t know if it’s just me, but none of that sounds right to me.  Just saying it sounds wrong.  This is one of the most dangerous things that is regularly communicated in our society.  This is something that we teach our kids, that gets reinforced as teenagers, that we get judged by as adults–especially by other family members.

What I’m going to share is an extreme example, but I hope it proves the point: if a stranger shoots you in the head, you as the victim expect that there are consequences for doing this incredibly harmful thing to you.  And if you died as a result of that gunshot?  Ideally, that stranger suffers the consequences to the fullest extent of the law.

So let’s say a family member, not a stranger, shoots you in the head instead.  Your mom, your dad, your sibling.  Does that gunshot cause the same harm?

THE STANDARD OF FAMILY IS HIGHER THAN ANY OTHER

Actually, no, it doesn’t.  Sure, the physical effects of that gunshot wound are exactly the same, but what about the mental and emotional impact?  It wasn’t just some stranger who did this to you–it was a family member with whom you need to remember that blood is thicker than water.  Right?

There is–or should be–a standard that automatically is applied to family when it comes to your relationship with them.  Maybe some family bonds are stronger than others, but it’s not the same when compared to the relationship you have with someone who isn’t blood related.  Why?

There is a string–a connection–between you and all of them, so of course there is a certain standard–a certain expectation–that all of them have with you, just as you need to have with them, and that’s exactly the way it should be.

So going back to people saying that the blood bond you have with family is stronger than the hurt they caused you.  Let’s get one thing straight about that right now: allowing yourself to be OK with a family’s harm against you is harmful to you.

The fact that people even think this is OK shows you how little they’ve analyzed the words coming out of their mouths.  They haven’t thought about you–the victim–and how much work you may have to do to recover from those wounds.  They were probably brought up in an environment where it was OK to disrespect people and think saying “sorry” is enough to make things better.

The psychological impact of these wounds can be so far-reaching that if someone who thinks you automatically forgive a family member for their actions against you would probably make their head explode.  The environment that we’re brought up in by our primary caregivers has a direct impact on how we operate; it affects the lens that we look at the world through.

So odds are you were brought up with this thinking at some point.  I think it’s safe to say that most of us are because that’s what society was like 20, 30, 40, 50 years ago.  That type of thinking gets passed on from generation to generation until someone–just one person–decides to break that cycle and start something new.

ABANDON SHIP–AND THE PEOPLE WHO NO LONGER FIT YOUR THINKING

This type of thinking needs to stop.  Everyone in your family is on this ship that’s going to sink everyone.  Do yourself a favor: abandon ship, along with the people who no longer fit your way of being.  It’s not fair to anyone to be guilt-tripped into having a relationship with someone who has caused significant harm to them for the sake of this concept of family that so many people get wrong.

I’m not saying that all families are bad.  That’s ridiculous.  What I’m saying is that those family members who screwed you over, badmouthed you, or physically or mentally hurt you–they don’t belong in your life.  Those bonds that people say you have with them aren’t really bonds.

They’re chains, and they’ll weigh you down, slow you down, and make you anchor yourself where you don’t want to be.  Some of the unhealthiest people in the world are the unhappy ones; and people who are unhappy are often the ones who have unresolved pain and are living a life full of lies.

Those lies can be an infinite amount of things, but if one of them for you is that you have to continue believing you must continue your relationship with someone in your family who you know doesn’t belong in your life, then you owe it to yourself to do the right thing.  If they’ve done enough damage that it no longer makes sense to continue with whatever it is you have with them, then it needs to end.

You don’t have to be mean about any of this, but you do need to tell the truth.  You have to tell the truth to those family members who hurt you and explain to them that you don’t expect them to change, but in order for you to be the healthiest you can be, you need to leave them, whether that’s physically, mentally, or emotionally.

Most importantly, you have to be truthful to yourself.  Tell yourself why you’re caring for you this way; and forgive yourself for believing the lies that you’ve heard for all of these years.

CREATE THE BONDS THAT SERVE YOU

There’s another piece here that you have to remember–that blood covenant that you made with someone else.  You weren’t born into that relationship–friendship or otherwise–with this person.  Maybe you went through trials and tribulations with them.  Perhaps you share similar life experiences, and now you’re both at the same point in life with the wisdom you’ve both gained.  You could have shared interests and life goals that put both of you on the same path.

In any case, you chose this person, and they chose you.  This isn’t just anyone.  You have a certain connection with them, and a specific set of circumstances and emotions have brought you two together to move into the next phase–and hopefully phases–of your life.

This is something so special, and the awesome thing about this is you don’t have to only choose one person.  You can have an entire community of people who have this connection with each other.  One where you’re supportive, appreciative, understanding, teaching, learning, and loving.

You may or may not have this with some or any of your family members.  You’ll always be connected to them, but that doesn’t mean you have to force yourself into having a kind of relationship with any of them that doesn’t serve you.  At the end of the day, you have to create bonds with the right people who serve you, and vice versa.

Because at the end of the day, the covenant of the blood is thicker than the water of the womb.

All right, everyone.  Thanks for listening to the Intentionally Emotive Podcast with Shaun Karim.  Don’t forget to subscribe, and for past episodes and links to my socials, visit www.shaunkarim.com.

Email has been submitted.